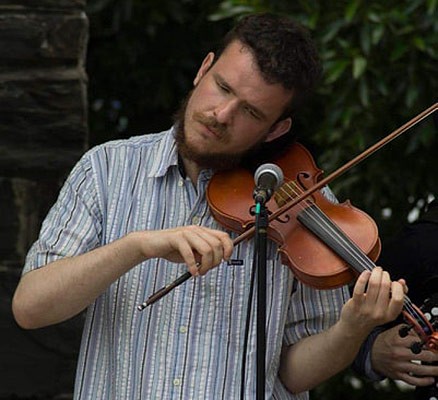 Fiddler, singer, and guitarist Mac Sumner's musical experience reflects a panoply of interest and ability, ranging from singing in classical choirs to playing fiddle and guitar for square dances. On the fiddle, he has studied with masters Sammy Lind and Lisa Ornstein. His singing has taken him everywhere from house concerts to cathedrals.

Introduced to Cape Breton music, he developed an affinity for the Celtic style, eventually spending three months on Cape Breton Island, Nova Scotia, Canada, learning from and performing with the greats. Mac recently returned from a nine-month stay in Galicia, Spain, where he further deepened his knowledge of the Celtic musical world.

Portland’5 Centers for the Arts presents Noontime Showcase, bite sized entertainment for you to squeeze into your lunch hour! These FREE monthly performances will feature some of Portland’s most popular acts. Noontime Showcase is presented by the volunteers of Portland’5 Centers for the Arts, whose goal is to make the performing arts accessible to everyone in Portland. Each season over 1,000 people attended the FREE monthly performances.