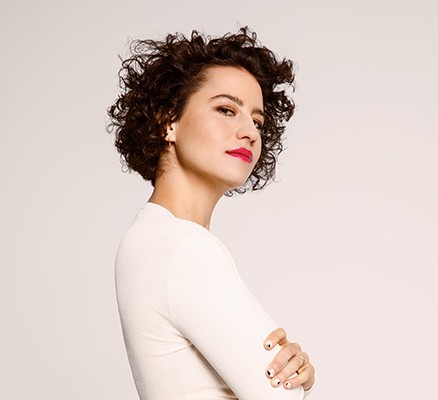 THIS IS A PHONE-FREE EVENT

Ilana Glazer’s upcoming tour will be a phone-free experience. Use of mobile phones, smart watches, smart accessories, cameras or recording devices will not be permitted in the performance space. Upon arrival at the venue, all phones and smart watches will be secured in Yondr cases that will be opened at the end of the event. Guests maintain possession of their phones at all times, and can access their phones throughout the show at designated phone use areas in the venue. All phones will be re-secured in Yondr cases before returning to the performance space. Anyone seen using a mobile phone during the performance will be escorted out of the venue. We appreciate your cooperation in creating a phone-free viewing experience.

ILANA GLAZER is an EMMY-nominated actor and the co-creator, writer, director, executive producer and star of the critically-acclaimed show Broad City. The show, which ran for five seasons, was nominated by the Writers Guild of America for ‘Best Comedy Series’ and garnered two 'Best Actress in a Comedy Series' nominations from the Critics Choice Television Awards. ​

Ilana can currently be seen in her debut comedy special THE PLANET IS BURNING which premiered on Amazon Prime the beginning of this year. Recently, llana voiced the character of EB, in Ellen DeGeneres’ Netflix Series GREEN EGGS AND HAM. The series is based on the classic Dr. Seuss book which also stars Adam Devine, Michael Douglas, and Keegan-Michael Key which released on November 8, 2019. Glazer just completed filming the A24 psychological horror film she also co-wrote and produced titled FALSE POSITIVE in which she stars alongside Justin Theroux and Pierce Brosnan.   ​

Ilana is also now working on the Generator Collective series, which she co-founded with Glennis Meagher in 2016, with the mission to gather, talk, and learn more about politics and government ‘without feeling dumb.’ Ilana plans to host a number of Generator Live events this spring with ‘Genny Social’ dance parties in particular to get the public involved.

Ilana along with Abbi Jacobson signed a first look deal with Comedy Central and Viacom Television networks and currently have two projects already in development at Comedy Central under the new pact including: Mall Town USA and Young Professionals, alongside her brother, Eliot Glazer.  ​

On the big screen, Ilana starred opposite Scarlett Johansson in Sony Pictures’ comedy, Rough Night, directed by Lucia Aniello.  In addition, Glazer was previously seen in the film The Night Before opposite Seth Rogan and Joseph Gordon-Levitt. Glazer is executive producing the upcoming Warner Bros. and BuzzFeed motion picture Brother Orange, along with Ellen DeGeneres and Jeff Kleeman, and staring Jim Parsons.  ​

In 2017, Glazer and 2 Dope Queens star Phoebe Robinson toured across North America with an 11-city stop for their ‘YQY’ (Yaaas Queen Yaaas) tour.   ​

Glazer trained at the Upright Citizens Brigade Theater where she and Abbi Jacobson met.  She currently resides in New York City.

Raiders of the Lost Ark in Concert - Cancelled

Cancelled: Oregon Symphony presents ­­­­­­Raiders of the Lost Ark in Concert at the Portland'5 Arlene...