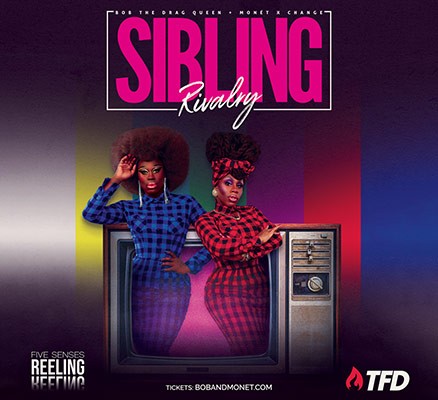 We at Five Senses Reeling consider our biggest responsibility to protect the well-being and safety of our artists, tour crew, and fans, and are officially making the difficult decision to postpone all of our tours this year, including Miz Cracker’s American Woman, and Bob & Monét’s Sibling Rivalry.

With more specifics coming very soon, we can confirm American Woman will be moved to Winter 2021 and Sibling Rivalry to Spring 2021.

If you have a ticket to either of our North American tours, American Woman and Sibling Rivalry, and choose to hold on to it, we’ve got some exclusive content to share with you between now and the new date, as well as a special gift at the door of the rescheduled show!

Bob The Drag Queen and Monét X Change invite you to a fierce sleepover for their debut theatrical world tour! Join them in a night of make believe, makeup, and Sibling Rivalry.

Monét X Change, Miss Congeniality of RuPaul’s Drag Race Season 10 and winner of AS4, and Bob the Drag Queen, winner of Season 8 (she won the first time), are not actually siblings, but they are the intensely hilarious comedy duo with infectious chemistry behind the hit podcast Sibling Rivalry.

In addition to their touring and music careers, you’ve seen Bob in his comedy specials, ‘Suspiciously Large Woman’ and ‘Crazy Black Lady’ and Monét on her BUILD Series variety talk show ‘The X Change Rate’. Don’t miss the banter, the dancing, the laughs, and the sickening performances from this hysterical comedy duo this Spring.

Presented by Five Senses Reeling and Producer Entertainment Group, in partnership with TFD Presents in Canada.

Oregon Children's Theatre's musical Last Stop on Market Street at the Newmark Theatre May 2–May...

Oregon Ballet Theatre's performance of The Americans 2.0 at the Portland'5 Newmark Theatre June 5...

Dance Party: Then and Now! - Cancelled

Metropolitan Youth Symphony's Dance Party: Then and Now! concert at the Newmark Theatre on Tuesday, June...

Vaccines: Autism and Other Myths - Cancelled

Cancelled: OHSU Brain Institute presents Vaccines: Autism and Other Myths with Dr. Peter Hotez at the...