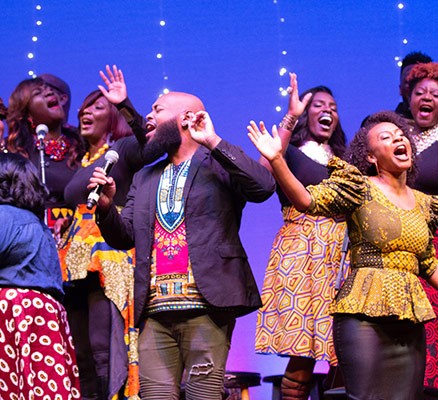 Presented by Portland'5
Trey McLaughlin & The Sounds of Zamar

Tickets are also available at the Portland'5 Box Office, TicketsWest outlets and by phone 800.273.1530.
Service charges apply. Arts For All tickets available 2 hours prior to show (limited quantities).

Trey McLaughlin & The Sounds of Zamar

Trey McLaughlin & The Sounds of Zamar "In Awe Of You"

Trey McLaughlin & The Sounds of Zamar have undoubtedly carved a place for themselves in the music industry through soul-stirring arrangements of contemporary gospel, musical theatre, and rich original compositions. The ensemble, organized in 2009, has performed with gospel greats such as William McDowell, Kierra “Kiki” Sheard, Richard Smallwood, Pastor Charles Jenkins, Earnest Pugh, Damien Sneed, and James Fortune.

McLaughlin and this anointed group are known for their rich harmonies and beautiful blends which are showcased throughout their debut album Limitless, released in November 2012. The 14-track compilation is sprinkled with ballads and anthems giving glory to God. Limitless is a compilation of original songs that will bring inspiration and joy to the hearts of those who listen.

In addition to their distinct gospel style, Trey McLaughlin & The Sounds of Zamar have inspired audiences with clever arrangements of musical theatre covers. Always a fresh perspective, the group’s sound is truly authentic while capturing the essence of the original piece.

With their expressive vocals and intricate arrangements of contemporary gospel, The Sounds of Zamar have transcended cultural boundaries. The group’s music is sung all over the world. Their travels include Paris, France; Krakow, Poland; Menorca, Spain and Rajadell, Spain.

Trey McLaughlin & the Sounds of Zamar just embarked upon their first National Tour entitled “The Zamar Experience,” which began in October 2018. Additionally, the group is producing its sophomore album, to be released in 2019.

Portland'5 presents National Geographic Live—Pursuit of the Black Panther at the Newmark Theatre...