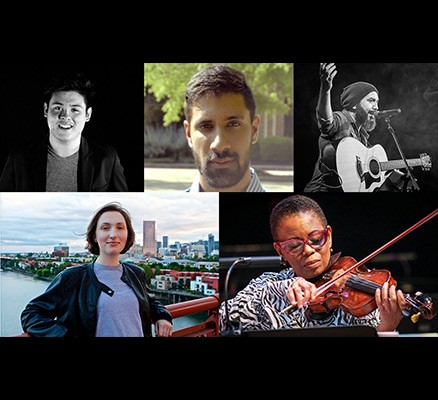 The MYS Spring Concert is free on YouTube, but requires registration to receive a private concert link. Register here to receive an emailed link to the concert.

The Metropolitan Youth Symphony’s (MYS) Spring Concert will premiere on March 13 at 7pm PST on the MYS YouTube Channel and will feature world premiere pieces by composers from the Youth Orchestra Commissioning Initiative (YOCI). The collaborative project, initiated by Portland Youth Philharmonic (PYP) in partnership with New Jersey Youth Symphony and MYS, is designed to create remote performances of new works by women and composers of color. Student musicians connect with YOCI composers, who have written chamber music pieces for students to rehearse and perform from their homes. "MYS is thrilled to be part of this collaboration, as we are firm believers in the importance of performing the music of composers from communities that have been historically underrepresented on the concert stage. Our students' response to the challenge of learning and recording these pieces has been overwhelmingly positive, and we are excited to share the results with our audiences," says MYS Music Director, Raúl Gómez.

Seare Farhat composed “SPEM IN ALIUM,” designed for three antiphonal groups of strings, MYS Concert Orchestra, MYSfits and Vivaldi Strings. According to Farhat, “piece was written not only to find beauty in the process of remote music making, but to embrace its quirks and challenges” and “is a wash of sound that sometimes focuses on one group, and at other times floods the ears with massive sonorities.”

MYS Concert Orchestra will also perform Katie Palka’s “flock,” which is inspired by the composer’s observations of geese and is an attempt to acknowledge and honor the “same urge, longing, to come together to create something larger than our individual selves.”

The Symphony Orchestra will perform the remaining pieces in instrumental sections. Brass and percussion will perform Aaron Copland’s iconic “Fanfare for the Common Man,” composed as a musical metaphor to inspire unity, and the woodwind section will perform Arthur Bird’s “Marche Miniature.”

The evening includes performances by all MYS ensembles, with repertoire from Dvořák to Corelli.

The MYS Spring Concert is free on YouTube, but requires registration to receive a private concert link. Register here, to receive an emailed link to the concert.