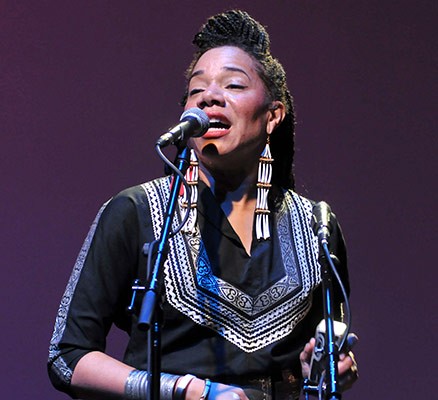 Due to unforeseen circumstances, the Martha Redbone Trio performance is cancelled. Ticket purchases made by credit card will be automatically refunded. For cash or gift card purchases, please return tickets to the original place of purchase for a refund.

Martha Redbone is one of today’s most vital voices in American Roots music. A multi award-winning musician, the charismatic songstress is celebrated for her tasty gumbo of roots music embodying the folk and mountain blues sounds of her childhood in the Appalachian hills of Kentucky mixed with the eclectic grit of her teenage years in pre-gentrified Brooklyn. With the power of her gospel singing African-American father’s voice and the determined spirit of her Cherokee/Shawnee/Choctaw mother, Redbone broadens all boundaries of Americana. Her latest CD, The Garden of Love- Songs of William Blake, produced by Nitty Gritty Dirt Band founder/Grammy Winner John McEuen is an unexpected twist – “a brilliant collision of cultures” (New Yorker) features Martha's magnificent voice, Blake's immortal words and a masterful cornucopia of roots music (folk, country, Piedmont blues, gospel, bluegrass, soul and traditional Southeastern Native American).

Redbone and her long-term collaborator, pianist/composer Aaron Whitby are called “the little engine that could” by their “band of NYC’s finest blues and jazz musicians” (Larry Blumenthal-Wall Street Journal). From grassroots beginnings with residencies at the original Living Room NYC, then Joe’s Pub and nationally at powwows across Indian Country in support of her debut album, Home of the Brave – “Stunning album, the kind of woman who sets trends” (Billboard) – Redbone has built a passionate fan base with her mesmerizing presence and explosive live shows. Her album Skintalk is described as the soulful sound of “Earth, Wind and Fire on the Rez” (Native Peoples Magazine) and is recognized as an example of Contemporary Native American music in the Library Collection at the Smithsonian National Museum of the American Indian.

The Redbone/Whitby team’s newest work is Bone Hill - The Concert, a devised, interdisciplinary musical theater work that brings to light an important piece of American history that has never been told. Inspired by the lives of Redbone’s family in the hills of coal- mining Appalachia, Bone Hill - The Concert is the journey of a woman, Red, returning to her homeland in Black Mountain and the coalmines of Kentucky where her family has dwelled for centuries. As a contemporary multi-racial Cherokee/Shawnee and African American family, they are permanently bonded to their culture, identity and the mountain despite its violent past and the ever- changing laws of the land that attempt to extinguish them. Commissioned by Joe’s Pub and the Public Theater NY Voices, Redbone is a recipient of the NEFA National Theater Project Creation and Touring Grant and National Performance Network Creation Fund and Lincoln Center. In addition to Bone Hill, the Redbone/Whitby team have completed commissions for “Plurality of Privacy” project for the New York Theater Workshop, and are contributing composers for “Primer for a Failed Superpower” directed by Rachel Chavkin. In August 2018 the team composed music for “Other Side of the Mountain/Flood in the Valley”, an East-meets-West play for the Liangshan Theater Project in Sichuan, China–collaborating with the Yi minority– a mountain people, making connections between the Nuosu and Indigenous/African American mountain cultures.

Alongside her career as a recording artist and songwriter Martha Redbone has maintained a steady involvement with causes she believes in. Ms. Redbone is contracted by The Department of Indian Education- Louisiana, LaFourche Parish and teaches Southeastern Traditional Singing Workshop for the United Houma Nation’s Bayou Healers Cultural Enrichment Camp program. Redbone is a 2015/16 Fellow of the Native Arts and Cultures Foundation.

Martha guest lectures on subjects ranging from Indigenous rights to the role of the arts in politics and Native American Identity at many institutions including New York University, the University of Michigan and the University of Massachusetts at Amherst, to name a few. Redbone includes workshops and motivational talks with grade school children as part of her touring schedule on numerous reservations including Red Lake, MN, Cherokee, NC, Yuma AZ and Menominee, WI, among others. An exemplary ambassador for both Native and African-American Youth for the National HIV/Aids Partnership, she was awarded the Red Ribbon Award for Outstanding Leadership presented on World AIDS Day at the United Nations in 2005. After Hurricanes Katrina and Rita ravaged the communities of the United Houma Nation on the Gulf Coast, Martha single-handedly helped generate publicity that raised over $30,000. Redbone also performed with Bonnie Raitt and the late Floyd Red Crow Westerman and helped raise over $130,000 in scholarships for the Heart of the Earth Foundation where 12 outstanding Native American students who have overcome adversity receive full tuition to study in higher education. Currently Martha advocates for Why Hunger’s Artists Against Hunger and Poverty program which raises and awareness of poverty and hunger in the United States, with particular attention to Appalachia in Martha’s instance. Redbone supports the Man Up Campaign, the global youth movement to eradicate violence against women and girls for whom she served as the indigenous affairs consultant and creative advisor. She is particularly proud of her accomplishment in having the Campaign’s Board of Directors include an Indigenous North American contingent (independent of the USA) to the roll call of 50 countries taking part in their Youth Leadership Summit held at the University of Johannesburg in South Africa during the 2010 FIFA World Cup. Redbone is currently an Advisory Board member of The Carlisle Indian School Project.

Cancelled: Portland'5 presents the Martha Redbone Trio to the Winningstad Theatre for a live concert on ...