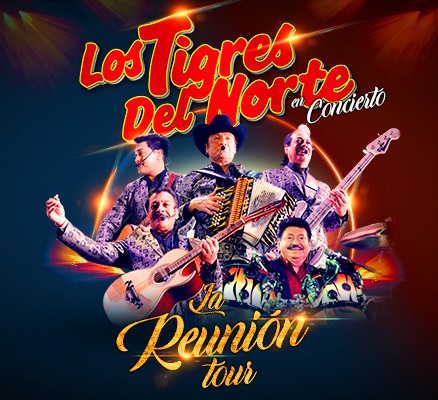 In the diverse world of Latin music, the regional Mexican genre alone accounts for more than half of all music sales (outpacing the combined sales of pop, rock, tropical, urban & all other styles) and Los Tigres del Norte are the undisputed legends of the genre. In a cover profile on the group, Billboard magazine declared the family of musicians as, “the most influential regional Mexican group in the United States… Los Tigres del Norte are not just another popular musical act…. Instead, they're widely viewed as the voice of the people.” Explaining the importance of Los Tigres, the New York Times went even further, declaring:  “Latin music's greatest statesmen are Los Tigres del Norte…Los Tigres sell millions of records, regularly top Billboard's Latin charts and draw tens of thousands of fans to stadiums… In short, they are among the most popular acts in Latin music today.”

With more than 500 recorded songs to their credit, Los Tigres del Norte have sold over 37 Million albums worldwide, while notching 22 #1 albums and more than 50 #1 singles. The group has received countless Platinum records and numerous awards - including multiple GRAMMY and LATIN GRAMMYS, the Latin Recording Academy’s Lifetime Achievement Award, and The Hispanic Heritage “Legends” Award at The Kennedy Center. Even after an unrivaled four-decade career, Los Tigres continues to be at the forefront of Latin music popularity – still performing regularly to audiences exceeding 100,000+ a night, debuting at #1 on the charts with each album and single they release, and continually blazing new trails for the genre. The band’s recent milestones include headlining Mexico’s Historic Bicentennial Celebration, being joined my numerous members of Congress while headlining the massive CAMINO AMERICANO Immigration Rally & March upon the National Mall in Washington DC, and the release of the first MTV Unplugged album dedicated to the Regional Mexican genre: "MTV UNPLUGGED: LOS TIGRES DEL NORTE & FRIENDS.” – which quickly went on to earn a rare Diamond sales certification.

“Los Tigres has reinvented Mexican popular music… the most perceptive chroniclers of the Mexican American experience…one of the clearest windows into the immigrant soul.” – Los Angeles Times

“[Los Tigres Del Norte] should be compared to Bob Dylan, U2, or the Clash” – All Music Guide

Ringo Starr & His All Starr Band

Emporium Presents welcomes Ringo Starr and His All Starr Band to the Portland'5 Arlene Schnitzer Concert...

Revolution: The Music of The Beatles – A Symphonic Experience

Oregon Symphony presents Revolution: The Music of The Beatles – A Symphonic Experience. October 15 &...

All ages welcome. Reserved seating. Everyone must have a ticket. No refunds, no exchanges.