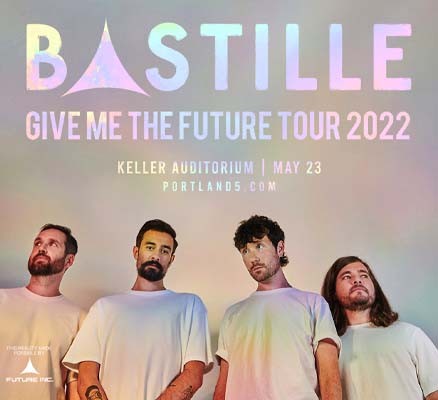 Give Me the Future Tour | with Alice Merton

Monqui Presents welcomes English pop rock band Bastille to the Portland'5 Keller Auditorium on Monday, May 23, 2022 at 8pm, as part of their Give Me the Future Tour.

Give Me The Future Experience Ticket Package:

About Bastille's Give Me The Future:

Give Me The Future, Bastille's wildly-ambitious new album, is a tribute to tech times and a glimpse of what could be to come. Exploring both the opportunities of new technology and the dark side of lives lived online, it's as playful as it is thought-provoking, as dystopian as it is dancefloor-friendly and as electronic as Bastille have ever been.

Eerily, songwriter Dan Smith came up with the concept pre-pandemic. The album was already underway and the band on hiatus from touring for the first time in eight years when the world shut down, forcing interaction solely through screens.

"Writing the songs at such a strange time, with everyone stuck at home, glued to screens, fed into the feeling that what's real and what's not is now difficult to discern," says Dan. "We're in the age of deep fake, fake news and lying world leaders. Online, you can be anyone, go anywhere. You can choose how you look, rewrite your past, behave as you like. We're a whisker away from the technology at the heart of the album."

Future Inc, a fictional, but familiar tech giant has invented Futurescape, a device which allows users to live out their dreams virtually. You'll witness how it works in the video for euphoric lead single "Distorted Light Beam" and its thrill-ride follow-up "Thelma + Louise," both recently shot in Serbia, featuring Dan alongside the BAFTA winning Save Me and His Dark Materials actress Remmie Milner.

"Future Inc is a bit of fun, a way to focus the themes of the album and to question the motives of big tech," says Dan. "Most tech companies start out with seemingly good intentions, but a few years down the line, you're up to your neck in what you didn't expect. What Future Inc stands for will become clear as the album rolls out."

Opener "Distorted Light Beam"'s gaming-referencing lyrics set the stage for songs themed around escape on an album cinematically structured with interludes and a spoken word, state-of-the-nation address by Award-winning actor, musician, writer, creator, producer, director and activist Riz Ahmed. Throughout the album campaign, Bastille will team up with genuine tech companies and employ A.I. to distort what's real and what's not.

"I've always admired artists who can create a world around an album," says Dan. "It's the film fanatic in me. Everything from the artwork and the videos to the tech and how we perform the album live will tie together."

"As usual, I haven't made it easy -- for the band or for our fans. But I'm not interested in easy or straightforward commercial success. If I was, I'd write love songs."

The initial inspiration for Give Me The Future came not from tech, but a 2019 Edinburgh Festival stand-up show about maladaptive daydreaming.

"It was fascinating," says Dan. "This guy spent six or seven hours every day inside his head, dreaming himself somewhere else, as someone else, as a way to cope with childhood trauma. I'd never heard of maladaptive daydreaming before. Apparently, it's not uncommon."

"The more I looked into it, the more it made sense for an album. Imagine you could dream yourself into any time, place or space. Think VR that your mind can control. If a device could allow you to do that, why would you want to stay in the real world? Where would you go? What would you do? The possibilities are infinite."

On Give Me The Future, Bastille head everywhere from '80s New York with the artist Keith Haring ("Club 57") to a hospital in Australia ("No Bad Days"). You'll hear disco basslines, guitars, gospel, spaceship sounds, sensual strings, whistling and vocoders, including a plug-in beloved by Bon Iver and a talk box favoured by Kanye West. The title track tips its hat to Phil Collins and The Police, "Shut Off The Lights" is a sonic love letter to Paul Simon's Graceland and "Stay Awake?" nods to Daft Punk and Quincy Jones.

Having thrown himself into co-writing for other artists in recent years -- most recently with BRIT Rising Star winner Griff -- for the first time ever on a Bastille album, Dan inched open the door to collaborators. "Distorted Light Beam" was co-written remotely with Ryan Tedder, who executive produced the album. Dan also co-wrote with friends over Zoom and in person at his south London studio when it was allowed to reopen after the first lockdown.

"I'm still incredibly protective about Bastille," he says. "I've been hesitant to let other people in. But after a trilogy of albums and many mixtapes, it felt like the right time to relinquish a little control."

"Ryan is the opposite of me. I'm a negative, introverted, slightly grumpy pessimist. He's the most positive, upbeat person on the planet. That's probably why it worked. The album was almost done when Ryan came on board, but hearing his opinion helped me to edit some of the songs and decide what should and shouldn't make the final cut."

From the woozy "Plug In...," a near-rap which whisks through relationships with robots, driverless cars, melting ice caps and billionaires rocketing to Mars, to "Thelma + Louise," a tribute to the ultimate escape film which turns 20 this year, to the vocoder-strewn, ludicrously sub-titled closer "Future Holds (Who knows what the future holds. Don't matter if I got you)," featuring the gospel singer BIM, a star of Bastille's Re-Orchestrated gigs, Give Me The Future is as sonically diverse and it is ambiguous.

"I'm not trying to comment on whether tech is good or bad," says Dan. "I'm just observing the truly weird times we're living in and having fun with it. As the final track says, stop moaning. This is happening, whether you like it or not. Finding happiness in the moment is surely the aim, whether it's in a real or virtual world."

Growing up around the world, singer/songwriter Alice Merton was as influenced by other cultures as much as transience itself. Born in Germany and raised in Canada and England, Alice Merton's absorption of different styles and sounds helped craft the worldly progressive pop leanings on her debut "No Roots“, which came out in 2016. Alice Merton has over 1B+ total global streams, with her breakthrough debut single “No Roots” being an international smash hit with 825MM+ streams, 1MM+ sales worldwide, and having nearly 1MM+ creations on TikTok. After her debut EP released in 2018, she was the #4 most Shazamed Artist that year.

Merton's previous TV performances include The Tonight Show Starring Jimmy Fallon, LIVE! With Kelly and Ryan, The Late Late Show with James Corden, and Good Day NY. Alice Merton had a headline US tour after her debut. She has played major global festivals and also went on tour supporting Vance Joy. Deemed an “Artist You Need To Know” by Rolling Stone, Merton has received press support from Billboard, Stereogum, Line Of Best Fit, and more. Alice Merton has been a winning judge of the German edition of The Voice. Now, Alice Merton is set for wider international recognition as she prepares to release her eagerly anticipated sophomore album S.I.D.E.S. on June 17th via Mom + Pop.

The Illusionists—Magic of the Holidays

Tobin Entertainment and Red Tail Live present The Illusionists—Magic of the Holidays at Keller Auditorium ...

All ages welcome. Reserved seating. Everyone age 1 & over must have a ticket. No refunds, no exchanges. 6-ticket limit per household.