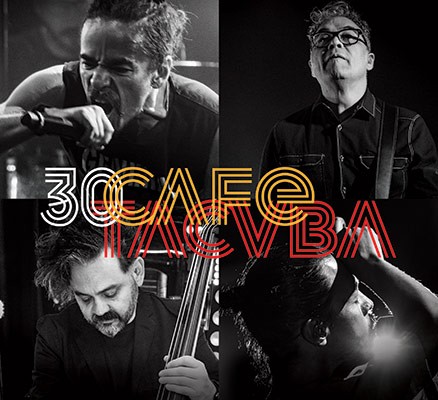 Café Tacvba is widely recognized as Mexico’s leading alternative rock band and indeed one of the most influential alternative groups to come out of Latin America, spearheading a non-conformist musical movement with their blending of elements such as rock, indigenous folk, electronic and punk music. With a career spanning 30 years, they continue to expand an already massive audience of devoted fans throughout the Americas, Europe and beyond. They have won multiple Latin Grammys and a Grammy, and their album, Re, was named the “Number One Latin Rock Album of All Time” (Rolling Stone) in 2013.

Starting out in the ‘80s as a garage band of graphic design students in the northern Mexico City suburb of Satélite, the band took the name Cafe Tacuba (changed later to Cafe Tacvba) in 1989, when they solidified the lineup as lead singer Rubén Albarrán, guitarist José Alfredo Rangel (Joselo), bassist Enrique Rangel (Quique), and keyboardist Emmanuel del Real (Meme). Their flare for presenting a mix of rock, new wave and regional Mexican sounds with light-hearted irreverence made them a sensation on the club scene in Mexico City, and caught the attention of then up-and-coming Argentine producer Gustavo Santaolalla.  After arranging their contract with Warner Music, Santaolalla produced their first album, Cafe Tacuba, (1992), beginning a long and fruitful collaboration for albums to come. The band’s original lineup of four remains the same today, though they have diversified their roles within the band. Each a musician/composer in his own right, they continue to pursue individual artistic projects as well. Regular adjunct musicians include Alejandro Flores, violin, beginning in 1994, and drummer Luis “El Children” Ledezma, in 2003.

One constant throughout Cafe Tacvba’s career is innovation. While commonly regarded as the most prominent band to come out of the “rock en espanol” movement of the early ‘90s, the label has always been too narrow for Cafe Tacvba’s music. The lyrics are in Spanish, however their songs - rooted in Mexican culture yet incorporating multiple genres and influences - cross barriers with a musical language that is constantly evolving through experimentation and collaboration. They don’t so much honor rock traditions as break with them. As noted in the NYTimes, “Cafe Tacvba has earned its reputation as Mexico’s most visionary rock band…treating rock as a genre worth sustaining only if it could be exploded, repeatedly.“

No Cafe Tacvba album is like another. Each studio album is guided by an overriding artistic vision, from the styles of songs and instrumentation used, the collaborators involved, and the design of the packaging (usually done by themselves) - frontman Rubén even assumes a different stage name for every album and touring cycle. Each album feels like a reinvention: whether it’s the seminal Re (1994) with it’s wide range and dramatic style-switching (earning it comparisons with the Beatles’ White Album), the reimagined cover songs of Latin music classics in Avalanche de Éxitos (1996), the experimental electronica of the two-disc Revés/YoSoy (1999), the lush post-punk rock sounds found on Cuatro Caminos (2003, with drummers Victor Indrizzo and Joey Waronker from Beck), Si No’s (2007) classic rock vibe, or the lyrically introspective El objeto antes llamado disco (2012).

The LA Times noted, “On record, Cafe Tacvba comes across as one of the most innovative, versatile and lyrically smart bands in contemporary rock. On stage, it comes across as one of the most likeable.” Being compelling as a live band is in their DNA:  they originated as a live act with a cult following, refining their music through multiple performances before ever recording. Their creative energy on stage seems boundless. Exuberant and playful, they can connect with an audience of 80,000 in Mexico City’s Foro Sol. “Beyond the incredible live performance, what stunned me was the rapport the Tacvbos, as they're known, have with their audience.” (NPR Alt.Latino).

“Because Café Tacvba draws not just from rock and new wave, but from Mexico and Latin America, they have a wider palette than any band I can think of.” — Victor Indrizzo (Beck)

“Number 1 Latin Rock album of All Time (Re).  Every album that the Mexican quartet released after this one is just as good, but Re was the one that redefined the rules of the game. It was OK to scoff at Mexico’s norteño roots, provided the nod was as affectionate and inspired as their hit “La Ingrata.”  It was valid to embrace the foreign influence of rock & roll and punk, as long as it was blended with authentic Latin sounds.  A feeling or reckless enthusiasm permeates Re’s 20 tracks — the wide-eyed grin of a young band discovering the grand achievements it was capable of. ” — Rolling Stone

“Not unlike Radiohead, they just keep evolving in unpredictable ways.” — Nic Harcourt KCRW

“One of the biggest and most iconic Latin American bands.” Billboard

Multi-instrumentalist and songwriter siblings Ruen Brothers open the show with a short set of their throwback rock and roll sound.