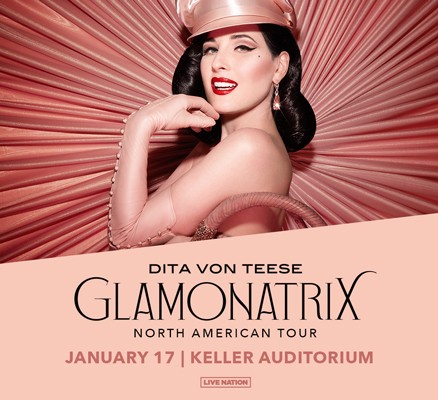 The “Glamonatrix” tour boasts no less than four spectacular all-new acts for Dita, each one more lavish than the last. Smothered in Swarovski crystal, she reinvents the classic burlesque “surprise cake” routine with a massive bejeweled cake, freshly served with a delightful whimsicality. For the jaw-dropping “Lipteese” number, Dita evokes a John Willie retro-fetish dream, riding her giant sparkling lipstick to energetic remixes from her album by French artist Sebastien Tellier and Australian electronic dance artist Andrew Armstrong of the band Monarchy. In another new act, this raven-tressed Glamonatrix will titillate as a big cat tamer in an erotic twist on vintage circus chic, wielding a crystallized whip while wearing a sparkling Hussar style suit (decorated with well-earned jeweled medals for excellence in striptease, of course!) Fans can also look forward to a thrilling update of her famous martini glass performed with an ensemble cast. Dita will be joined by the most revered performers in burlesque debuting exciting new acts for this tour, including Dirty Martini and Australian star Zelia Rose, and the world’s premiere male stripteaser, Jett Adore. Dita’s dapper Vontourage, Alek Palinski and Elio Martinez, return to the stage and Dita is also pleased to introduce Tosca Rivola and Laszlo Major to Glamonatrix showgoers.

The Glamonatrix tour follows Von Teese’s “The Art of the Teese” which is the most successful burlesque tour of all time, playing to sold-out theaters in cities across the United States, Canada, Europe, and Australia.

The Glamonatrix show is a full evening of comedy and sophisticated striptease that celebrates diverse beauty. Far from being a typical burlesque show, Dita elevates and modernizes the classic 1940’s variety show, with both male and female forms glorified in a body-positive way that inspires and uplifts.

One-on-one meet & greet opportunity with Dita after the show. Pose together with Dita and have a photo taken with your camera phone. Dita will personally dedicate and sign a poster for you. THIS VIP EXPERIENCE MUST BE ACCOMPANIED BY A CONCERT TICKET.

Ain’t Too Proud: The Life and Times of The Temptations

Broadway in Portland presents Ain’t Too Proud: The Life and Times of The Temptations at the...

Broadway in Portland presents a new production of Lerner & Loewe’s My Fair Lady at Keller...

Ages 18 & older only allowed. Reserved seating. Everyone must have a ticket. No refunds, no exchanges. 6 ticket limit per household.