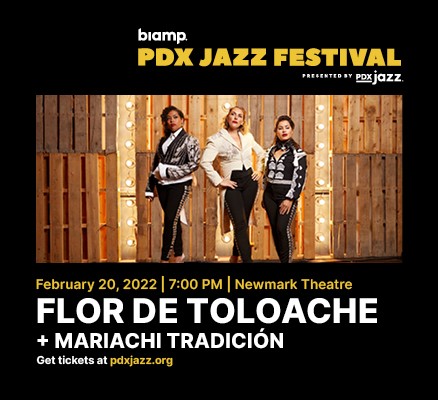 The 2022 Biamp PDX Jazz Festival includes artists spanning the full breadth of the genre; artists who are driving the evolution of jazz figure prominently alongside GRAMMY® Award-Winning masters.

Latin GRAMMY© Winners Flor de Toloache make New York City history as its’ First and Only All­-Women Mariachi Group. Founded in 2008, Flor de Toloache is lead by singers Mireya I. Ramos (founder) & Shae Fiol (founding member). Reminiscent of the early days of mariachi the group started as a trio, Harp, Violin and Vihuela. Today, Flor De Toloache’s members hail from diverse cultural backgrounds such as Mexico, Puerto Rico, Dominican Republic, Cuba, Australia, Colombia, Germany, Italy and the United States. This defines their unique flavor and sound. The result of this cultural bouquet is an edgy, versatile and fresh take on traditional Mexican music. They coalesce as would a band of sisters, with a grace and vibrant beauty that casts a spell over their audiences not unlike the legendary Toloache flower still being used in Mexico as a love potion. While working to preserve centuries old traditions of Mariachi, their melange of the traditional and the modern pushes the boundaries of the genre and brings Mariachi music to new audiences.

Over the course of the last few years, Flor de Toloache’s performances have illuminated world renowned stages. In 2015, the group embarked on an extensive European and U.S tour as the opening act of Black Keys’ singer Dan Auerbach’s new band, The Arcs ensuring their charming and captivating of audiences coast to coast.

Daptone distributed Chulo Records, the label of their “Las Caras Lindas” album was also the connecting bridge between Flor De Toloache and The Arcs, with whom they recorded “Yours, Dreamily”. They have appeared on on Chicano Batman’s acclaimed album “Freedom is Free” as well as three collaborations with Fania Records recorded and filmed live for the legendary label.

Mariachi Tradición from Forest Grove High School has had the privilege to open up for internationally renowned artists such as La Santa Cecilia and George Lopez at the Revolution Hall and Keller Auditorium in Portland, Oregon. Mariachi is a class that is offered at both the middle school and high school level. The students who will be performing tonight are students who are in the top performance group, which is an audition based ensemble. This group has travelled to Arizona for the Tucson International Mariachi Conference and to Texas to participate in the Festiba Mariachi Festival at the University of Texas Rio Grande Valley.

In order to protect attending audiences, performing artists, and working personnel, and to create the safest environment possible, safety officers and event staff will be on site at PDX Jazz events enforcing all provisions of this event attendance policy.

Refunds will be provided for those unable to meet the event admission vaccination requirements outlined in this PDX Jazz Event Attendance Policy.

Ticket holders who have already purchased a ticket to a PDX Jazz event, that are unable to meet the updated vaccination requirement, may request refund assistance by emailing ticketing@pdxjazz.com.

Refunds will be provided directly from the ticketing company that issued the ticket.

This policy is subject to change and updates will be posted at pdxjazz.org.