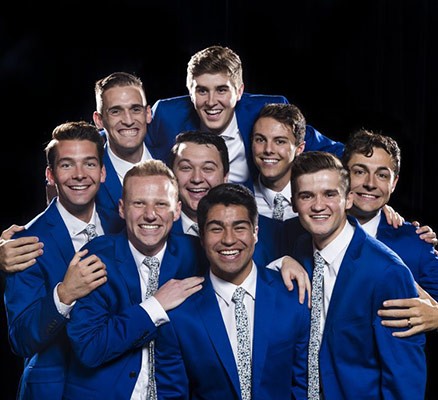 Vocal Point creates complex music and rhythms with only 9 voices

They have percussion without drums. They have a rhythm section without a bass. The only instruments on stage belong to the nine voices of the nationally renowned a cappella group Vocal Point. From Brigham Young University, Vocal Point captures faithful audiences throughout the world with their stunning, high-energy performances and their elaborate and fun music videos.

With a wide range of vocal possibilities—and seeming impossibilities—these crowd-pleasers have it all: rock, pop, country, jazz, and R&B that makes their family-friendly concerts a showstopper. This nine-man group takes the songs you are familiar with, retools them and delivers a new rendition, complete with all the complex instrumentation done entirely with their mouths. Each Vocal Point member displays musical ability, creativity, and stage experience—a combination which adds up to original, skillful, and spirited performances.

“Well, that’s about the most professional group at the collegiate level anywhere,” says Deke Sharon, founder of the Contemporary A Cappella Society of America (CASA) and Vocal Producer of NBC’s The Sing-Off.

“They’re so pro. They’re so entertaining. They have so much personality. But there is this intangible thing—where the singer is completely being himself and is translating something that you can’t even put your finger on, but you know it’s big.”—Ben Folds, judge of NBC’s The Sing-Off

“You guys have this overall stage presence, charisma thing that just seems so effortless for you.”—Sarah Bareilles, judge of NBC’s The Sing-Off

“Everyone knows that Vocal Point is a professional a cappella group whose members all happen to go to college.”—Ben Bram, Grammy Award Winning Producer of Pentatonix

Arts For All & Student Tickets

Arts For All tickets ($5) available with Oregon Trail Card two hours prior to show at the Portland'5 Box Office in Hatfield Hall at 1111 SW Broadway Ave. (limited quantities, first-come, first-served, while supplies last.)

ASL (American Sign Language) interpretation is provided at this performance.

Portland Opera has cancelled their premiere of Three Decembers at the Portland'5 Newmark Theatre...

The Neuroscience of Pleasure - Cancelled

Cancelled: The Neuroscience of Pleasure with Larry Sherman, Ph.D. at the Newmark Theatre on Monday, July...

All ages welcome. Reserved seating. Everyone age 1 & over must have a ticket. No refunds, no exchanges. ASL (American Sign Language) interpretation is provided at this performance.