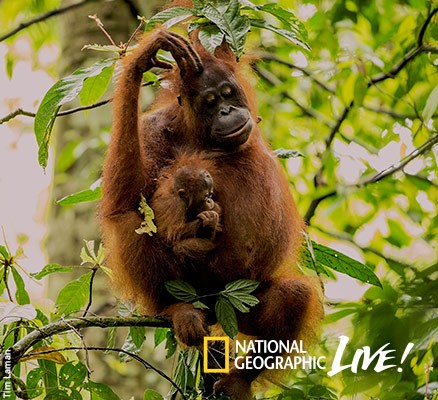 There are only a handful of places in the world where orangutans can be observed in the wild. And only a handful of people know them as well as biological anthropologist Cheryl Knott and her husband, wildlife photojournalist Tim Laman, who have dedicated their lives to understanding and protecting these animals.

Orangutans are an intelligent, resourceful, and threatened species—and one of the most difficult large land animals to study. Learn how Laman and Knott are combining innovative new techniques with good old-fashioned fieldwork to get a closer look at these animals with whom we share 97% of our DNA. They’ll share stories from their 25 years of following the orangutans of Borneo, giving us insights not only into their world, but also our own. 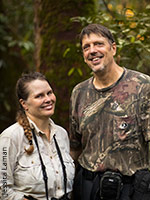 Frequent contributors to National Geographic, Cheryl Knott and Tim Laman are a husband and wife team who have been studying, photographing, and protecting wild orangutans in Borneo for over 25 years.

An associate professor at Boston University with a Ph.D. in biological anthropology from Harvard University, Cheryl pioneered innovative techniques to measure hormones, calories, and physiology in wild orangutans. In 2000, she co-founded the Gunung Palung Orangutan Conservation Program, which works to protect this critically endangered species and its rain forest habitat. She was a member of the inaugural class of National Geographic Emerging Explorers in 2004, has been the recipient of numerous research and conservation grants from the National Geographic Society, and has published over 50 scientific articles.

Tim is a field biologist, photographer, and filmmaker. Since earning his Ph.D. in biology from Harvard University, his cameras have become his main tools for telling the stories of rare and endangered wildlife and revealing some of Earth’s wildest places. Tim has received 10 grants from the National Geographic Society for his scientific expeditions to remote parts of Borneo, Australia, and New Guinea. He continues his long-term exploration of the Birds-of-Paradise in collaboration with the Cornell Lab of Ornithology, and has been making forays into wildlife cinematography, shooting for the BBC’s Planet Earth II and other projects. Tim has received many top photography awards and was named the Wildlife Photographer of the Year in 2016 by the Natural History Museum, London.

Live Nation presents Pod Save America: (A)live And On Tour 2022 at the Portland'5 Newmark Theatre on...