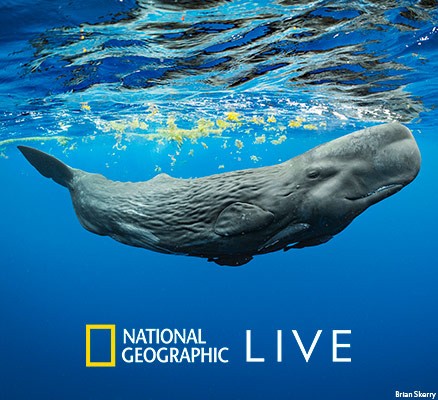 Online ticket sales have ended. A limited amount of tickets are available at the Portland'5 Box Office. Proof of vaccination (or negative test) and masks required.
Service charges apply.

Celebrated National Geographic Explorer and photographer Brian Skerry has spent nearly four decades exploring and documenting the world’s oceans. For his latest project, he turns his lens to one of the world’s most beloved animals to illuminate groundbreaking new insights into their lives and culture. Skerry spent more than two years in 24 locations around the world capturing remarkable images and video for a landmark National Geographic book, magazine story, and television series, Secrets of the Whales.

Hear his behind-the-scenes stories straight from the field and get an inside look at the groundbreaking science of whale culture—and its startlingly human parallels—across four different species. Discover the hunting techniques and international cuisines of orca pods and the multi-generational childcare systems and female-led families of sperm whales. Explore the culture of singing competitions among humpback whales and meet charming beluga whales in Canada that journey each summer to their “vacation resort.” Through Skerry’s mesmerizing work, uncover what these majestic creatures can teach us about ourselves and our planet.

This talk is part of the National Geographic Live 2021/22 Portland Speaker Series. 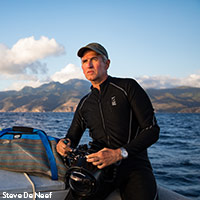 For National Geographic Magazine, Brian has covered a wide range of stories, from the harp seal’s struggle to survive in frozen waters to the alarming decrease in the world’s fisheries to dolphin intelligence—all cover stories. A fourth cover story in February 2017 focused on protecting special underwater ecosystems in U.S. waters, and during this coverage Brian produced the first images of a sitting U.S. President underwater.

Brian has also worked on assignment for or had images featured in magazines such as Sports Illustrated, The New York Times, The Washington Post, Paris Match, Esquire, and Audubon. Brian is the author of 12 books, including the acclaimed monographs Ocean Soul, SHARK, and the newly released Secrets of the Whales.

He has had numerous solo photographer exhibits, including Portraits of Planet Ocean, a two-year exhibit at the Smithsonian National Museum of Natural History in Washington, D.C. Other exhibits of his work have been held in cities worldwide, including Geneva, Barcelona, Lisbon, Shanghai, and Perpignan, France.

Brian frequently lectures on photography, exploration, and conservation issues, having presented at venues such as The United Nations General Assembly, The World Economic Forum in Davos, Switzerland, TED Talks, The National Press Club in Washington, DC, The Royal Geographical Society in London, and the Sydney Opera House in Australia.

Live Nation presents Pod Save America: (A)live And On Tour 2022 at the Portland'5 Newmark Theatre on...