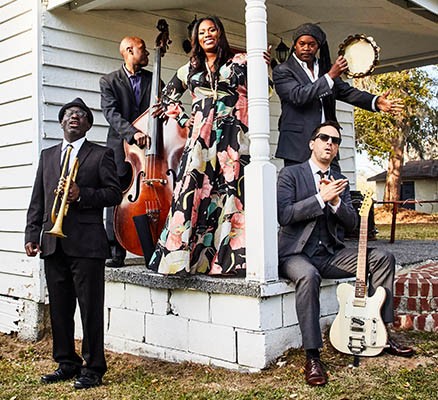 Tickets are also available at the Portland'5 Box Office, TicketsWest outlets or by phone 800.273.1530.
Service charges apply. Arts for All tickets available 2 hours before show.

GULLAH MUSIC FROM THE CAROLINA COAST

From the South Carolina low-country, where life is laced with African ways, comes Ranky Tanky, a quintet with music rooted in Gullah culture. From descendants of enslaved Africans isolated on the southeastern Sea Islands, Gullah is a unique mix of African and English that has shaped American art, food, language, and attitude. Translated loosely as "Get Funky!," Ranky Tanky updates traditional Gullah game songs, spirituals, and shouts with gospel vocals, jazz trumpet, and an R&B rhythm section.

Ranky Tanky released their eponymous debut on Oct. 20th, 2017. By December of that year, the group had been been profiled on NPR’s Fresh Air with Terry Gross and their album soared to the #1 positions on the Billboard, I-Tunes, and Amazon Jazz Charts.

South Carolina natives Quentin Baxter, Kevin Hamilton, Charlton Singleton, and Clay Ross first came together in 1998, fresh out of University, to form a seminal Charleston jazz quartet. Now, united by years apart and a deeper understanding of home, these accomplished artists have come together again, joined by one of the low-country’s most celebrated vocalists Quiana Parler, to revive a “Heartland of American Music” born in their own backyards.

"The biggest surprise of [GlobalFEST], Ranky Tanky proved that exotic music can be both unfamiliar enough to be surprising, and yet familiar enough to provoke swinging hips and nodding heads. When it works, it's the best of both worlds."– Paste Magazine

ARTS FOR ALL TICKETS

A limited quantity of Arts for All tickets ($5 for Oregon Trail Card holders) will be available at the Portland'5 Box Office beginning two hours before show time.