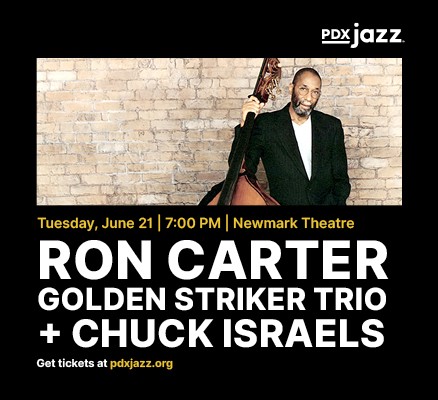 Note: the performance originally scheduled for February 18 has been rescheduled to Tuesday, June 21, 2022. Tickets from the original date will be honored and refunds are available for patrons unable to attend on the new date. For refund requests, please email portland5@paciolan.com or call 800-915-4698.

RON CARTER is among the most original, prolific, and influential bassists in jazz history, with more than 2,200 albums to his credit, an accomplishment honored in the 2015 Guinness Book of World Records. He has recorded with greats including: Tommy Flanagan, Gil Evans, Lena Horne, Bill Evans, B.B. King, the Kronos Quartet, Dexter Gordon, Wes Montgomery, and Bobby Timmons, Jaki Byard, Eric Dolphy and Cannonball Adderley.

From 1963 to 1968, Ron was a member of the classic and acclaimed Miles Davis Quintet. He was named Outstanding Bassist of the Decade by the Detroit News, Jazz Bassist of the Year by Downbeat magazine, and MVP by the National Academy of Recording Arts and Sciences. He earned two Grammy awards, one in 1993 for Best Jazz Instrumental Group, and another in 1998 for Call Sheet Blues from the film Round Midnight.

Ron has composed music for the classic films A Gathering of Old Men, The Passion of Beatrice and Blind Faith.

In 2014, Ron received the medallion and title of Commander of the Order of Arts and Letters, France’s premier cultural award, by the French Minister of Culture.

A best- selling author, Carter’s books include Building Jazz Bass Lines and his autobiography Finding The Right Notes, available in print as well as an audio book read by the Maestro himself. In 2016 he published Ron Carter’s Comprehensive Bass Method, an advanced level book pioneering the use of QR codes to demonstrate technique in printed books.

Additionally, Ron authored The Ron Carter Songbook, a collection of 121 original compositions including classic hits such as Little Waltz, For Toddler’s Only, Loose Change.

In 2017, Ron expanded his reach to his considerable worldwide following on Facebook, where he regularly posts helpful information and back-stories for bass players and fans alike. His “Facebook Live” events are enjoyed around the world.

2018 saw the publication of Behind the Changes, another groundbreaking book where Carter shows how he “changes the changes” with each new chorus, with a clear roadmap to how any bassist can do it with proper practice.

Ron teaches frequently at master classes around the world. He has also received five honorary doctorates, most recently from The Juilliard School.

Ron continues to tour worldwide, with his trio, quartet, nonet and big band, playing to sold-out crowds across Europe, Asia, and South America.

Chuck Israels is a composer/arranger/bassist who has worked with Billie Holiday, Benny Goodman, Coleman Hawkins, Stan Getz, Herbie Hancock, J.J. Johnson, John Coltrane, and many others.  He is best known for his work with the Bill Evans Trio from 1961 through 1966 and for his pioneering accomplishments in Jazz Repertory as Director of the National Jazz Ensemble from 1973 to 1981.

Among Chuck’s many recordings as a bassist, some outstanding ones include: Coltrane Time, with John Coltrane; My Point of View, with Herbie Hancock;  Getz au Go-Go, with Stan Getz; and many recordings with the Bill Evans Trio, including The Town Hall Concert; The Second Trio; Trio ’65; Live at the Trident; Time Remembered; and  Live at Shelley’s Manne Hole.

Recently retired from directing the jazz studies program at Western Washington University, Chuck has moved to Portland, OR to work in its vibrant jazz community and participate in his favorite Northwest city’s cultural life.

Live Nation welcomes Dr. Andrew Huberman to the Portland'5 Newmark Theatre on Wednesday, May 18, 2022 at...