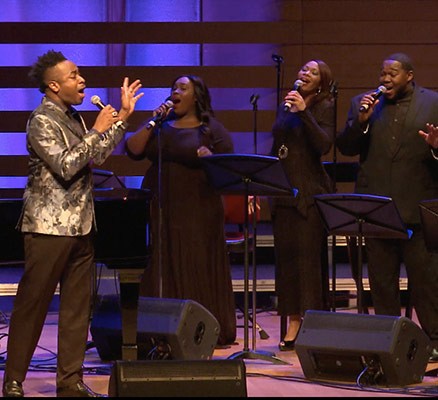 Presented by Portland'5
We Shall Overcome

Tickets are also available at the Portland'5 Box Office, TicketsWest outlets and by phone 800.273.1530. Service charges apply. Arts For All tickets available (w/ Oregon Trail Card) 2hrs. prior to show at box office.

The Three Sides of Damien Sneed

Inspired by the words and action of Dr. Martin Luther King, Jr., We Shall Overcome showcases repertoire from across the African American music traditions that electrified generations of civil rights activists and defenders with interwoven spoken word from Dr. King’s recorded speeches.

This production ties together a living lineage of music and culture that includes traditional gospel, modern gospel, classical, jazz, Broadway and spirituals. From Aretha Franklin to Wynton Marsalis; Duke Ellington to Stevie Wonder; Nina Simone to Donny Hathaway; and traditional spirituals and music from The Wiz, Damien’s unique understanding of each genre allows him to fluidly cover so much musical ground in a single performance.

Sneed is the founder and artistic director of Chorale Le Chateau, which has gained a global reputation for its vivid interpretations of vocal literature, from Renaissance period pieces to art songs to jazz, spirituals, gospel, and avant-garde contemporary music. He is featured on the recording of Wynton Marsalis’ Abyssinian Mass as a conductor, with Marsalis, the Jazz at Lincoln Center Orchestra and Chorale Le Chateau.

In April 2015, Sneed made his conducting debut at Carnegie Hall for Wynton Marsalis’ “Abyssinian 200: A Celebration” on the legendary Ronald O. Perelman Stage. Sneed has also ventured into the world of musical theater and has partnered with Tony Award winner George Faison as the musical director for CityParks Foundation’s SummerStage production of “The Wiz: A Celebration in Dance & Music” in historic Central Park.

“Damien Sneed is an ambassador for classical and gospel music who brings positivity, optimism and thoroughness to every occasion. His talent stretches across traditional divisions. In the realest sense, he uses his artistry to make our world a better place.”—Wynton Marsalis

We Shall Overcome is part of the 2019/20 Portland'5 Education Program season.

Arts For All Tickets

Arts For All tickets ($5) available with Oregon Trail Card two hours prior to show at the Portland'5 Box Office in Hatfield Hall at 1111 SW Broadway Ave. (limited quantities, first-come, first-served, while supplies last.)

The Jefferson Dancers' annual spring performances at the Portland'5 Newmark Theatre April 16–18, 2020 are...

The Rite of Spring - Cancelled

NW Dance Project'sThe Rite of Spring at the Newmark Theatre April 23–25, 2020 is cancelled.

Oregon Symphonic Band's concert at the Newmark Theatre on Sunday, April 26, 2020 is cancelled.

Oregon Children's Theatre's musical Last Stop on Market Street at the Newmark Theatre May 2–May...

Portland'5 presents National Geographic Live—Designed By Nature at the Newmark Theatre on Tuesday...