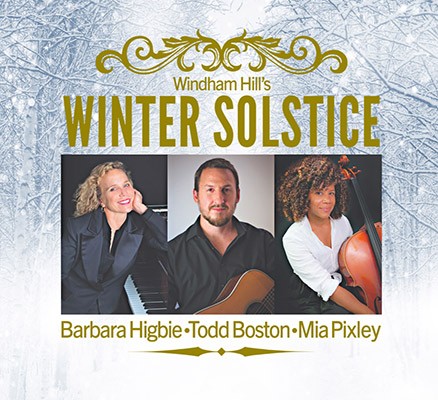 Barbara Higbie is a Grammy-nominated, Bammy Award-winning pianist/composer/ singer songwriter as well as a championship fiddler. The Los Angeles Times described her music as “a ray of bright sunlight,” and the San Francisco Chronicle calls her “full of life and brilliant in her playing, the most exciting musician we’ve heard.” In addition to being the first female instrumentalist on the Windham Hill label, Higbie has appeared with musicians as di erent as Santana, Bonnie Raitt, the Kronos Quartet, Milton Nascimento, and Spyro Gyra, recording on over 100 CDs. In 2011, Barbara was the first-ever artist-in-residence at the prestigious Jazz Club Yoshi’s. Agraduate of Mills College (where she was a student of Terry Riley’s) and the recipient of a Watson Fellowship, she collected traditional music throughout West Africa. At 23, Higbie recorded her Windham Hill 1982 duo release Tideline with violinist Darol Anger, which garnered a four-star review in Downbeat magazine. In 1984, she co-led a group with Anger including Mike Marshall, Andy Narell, and Todd Phillips to record Live at Montreux. The group became the Montreux Band (with Anger, Marshall, and Michael Manring) and toured internationally for 12 years. Higbie’s composition “To Be” became a radio staple of the 1980s, a TV theme song in Italy, and a video with heavy rotation on VH1. Her early Windham Hill titles have recently been reissued on Adventure Music. Higbie’s solo work has made the top ten lists of the Washington Post and Performing Songwriter magazine. The most recent of her six solo releases, Scenes from Life, was recorded in 2014 at Lucas lm’s Skywalker Sound.

Higbie recalls: “When I first met Will Ackerman in 1981, it felt like I’d encountered a human cyclone. If Will became excited about music, true magic happened. Before we knew it, Will was leading the charge and it seemed the whole world was following. It was a joyous time with a warm family feeling among the musicians. I recall truly breathtaking concerts at Davies Symphony Hall, the Montreux Jazz Festival, in a castle in Italy, and in a grand palace in Stockholm. Will Ackerman at the helm of Windham Hill is the truest example of a visionary in action that I have ever witnessed. It’s an honor to be part of these historic concerts.”

Todd Boston is a composer, producer and Billboard Top Ten Guitarist/Multi-Instrumentalist. He has spent over 30 years studying and cultivating a deep relationship to sound and the power of music as a tool for personal transformation and growth. He is an international touring artist and has shared his music at festivals, performing arts theaters, yoga studios, and other venues around the world. His album ONE (Billboard Top Ten New Age, 2017 ZMR Awards Nominee) and Touched by the Sun (2012 ZMR Best Acoustic Album, Produced by Grammy Winner Will Ackerman, Founder of Windham Hill Records) have been featured on radio and TV (Discovery, PBS) worldwide and received recognition and awards globally. Todd’s unique sound blends percussive and melodic finger-style guitar with Indian ragas and world music influences. In addition to guitar Todd performs on a mesmerizing custom handmade style of bamboo flute as well as various percussion and world instruments.

"Touched by the Sun is the work of a mature artist who has come of age and who has given us a great recording of singularity and value, the world’s a better place for his gift.” ~ Will Ackerman (Grammy-winning guitarist, founder Windham Hill Records)

Cellist, singer- songwriter, and composer Mia Pixley is a recent graduate of San Francisco Conservatory of Music. Mia and her cello have collaborated in award winning New York City Off-Broadway theater productions, film, and performance art compositions. Last year, she recorded cello on Fantastic Negrito's second GRAMMY award-winning album, Please Don't be Dead, which won Best Contemporary Blues. Most recently, she had the honor of playing cello on Barbara Higbie's beautiful album, Resonance. In 2018, Mia released her positively reviewed debut EP, Inside Under, through her previous musical alias Baeilou. She is set to release a music and visual art collaboration titled, "Spar Suite", which explores experiences of loss, mourning, and peace. Mia began playing the cello at the age of four at the University of Texas at Austin Youth String Project. She has studied classical cello with Joel Becktell, Wendy Sutter, (previous cellist of Bang On A Can), and Jennifer Culp (previous cellist of Kronos Quartet). Mia has also worked with Mark Summer (previous cellist of the Turtle Island Quartet) to learn extended cello techniques. Mia holds a Ph.D. in clinical psychology from CUNY Graduate Center and considers her musical endeavors an extension of her interests in psychology, community, and nature.

"You won't easily find a sound like Pixley and her twist on experimental classical music with a unique Southern vibe." - Magnet Magazine

James and Jamesy present O Christmas Tea: A British Comedy at the Newmark Theatre on Sunday,...

All ages. Reserved seating. Everyone age 1 & over must have a ticket. No refunds, no exchanges.