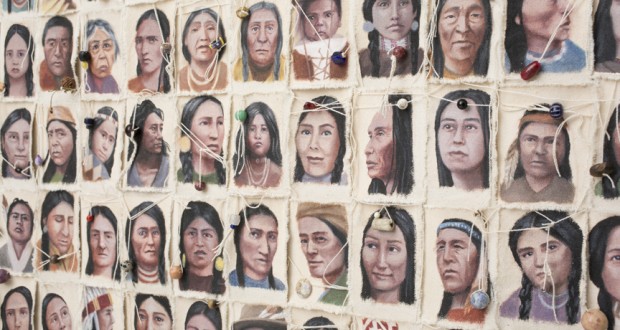 Portland artist Anna Magruder loves painting people from the past, going on vintage treasure hunts, and is always on the lookout for striking images and stories from bygone days. Her recent project, "Oregon's Painted History" brings those interests together. Funded in part by the Regional Arts and Culture Council, this series of historic surrealist paintings portray some of the hidden stories and people behind Oregon's history.

The idea for the project emerged after Magruder did a painting titled Métis, for a group show at The Robert Newell House Museum in St Paul, Oregon. Métis refers to children of French Canadian men in the fur trade and Native American women. The family portrait of mother and father with their daughter between them, sharing a braid of hair, alludes to the struggle for identity between two cultures. After receiving overwhelmingly positive response to the painting, she realized that there was more history to explore and show through her art. "Our city is influenced by what has gone on before and I wish to honor this history as well as the courage and resilience of the people who have paved our way," says Magruder. She wonders what remains the same, what has changed for the better, or what is worse.

Rather than recreating exact scenes of events, Magruder uses historic surrealism that relies on symbols and metaphors to capture emotional impact and broader implications of the topics. Some paintings in the series use identifiable figures, such as Beatrice Morrow Cannady, editor of Oregon’s largest African-American newspaper, civil rights advocate and first black woman to practice law in the state. The painting shows her spilling tea into a sea of white while behind her stand a variety of African-American supporters. Other paintings will show individuals who represent larger groups and concepts.

Originally from Dallas, TX, Anna Magruder has lived in Portland since 2001. The constant themes in her painting are faces, people, and the stories behind them. She has recognized a mild deficiency in her ability to recognize and track faces (prosopagnosia) and wonders if this focus on facial features is a way of learning and exploring what makes each person unique.