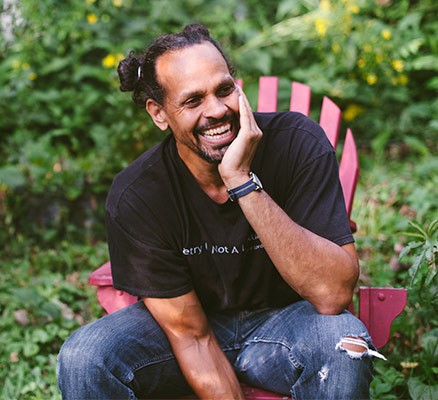 We are pleased to offer free registration for community members suffering financial hardship, as well as a range of ticket rates, to ensure this event can be accessible to all.

The selection for Multnomah County Library’s 19th annual community reading project, Everybody Reads, is acclaimed author and poet Ross Gay and his collection of essays, The Book of Delights.

Each year, Literary Arts presents the culminating event of the program—an author lecture. This year, the event will be held virtually on Thursday, April 8 at 6:00 p.m (PDT) and will feature an approximately 30-minute talk from Ross Gay, followed by an approximately 40-minute interview with local bestselling author, Lidia Yuknavitch.

We are pleased to offer free registration for community members suffering financial hardship, as well as a range of ticket rates, to ensure this event can be accessible to all.

Ross Gay is the author of four books of poetry: Against Which; Bringing the Shovel Down; Be Holding; and Catalog of Unabashed Gratitude, winner of the 2015 National Book Critics Circle Award and the 2016 Kingsley Tufts Poetry Award. His new poem, Be Holding, will be released from the University of Pittsburgh Press in September of 2020. His collection of essays, The Book of Delights, was released by Algonquin Books in 2019.

Ross is also the co-author, with Aimee Nezhukumatathil, of the chapbook "Lace and Pyrite: Letters from Two Gardens," in addition to being co-author, with Rosechard Wehrenberg, of the chapbook, "River."  He is a founding editor, with Karissa Chen and Patrick Rosal, of the online sports magazine Some Call it Ballin', in addition to being an editor with the chapbook presses Q Avenue and Ledge Mule Press.  Ross is a founding board member of the Bloomington Community Orchard, a non-profit, free-fruit-for-all food justice and joy project. He also works on The Tenderness Project with Shayla Lawson and Essence London. He has received fellowships from Cave Canem, the Bread Loaf Writer's Conference, and the Guggenheim Foundation. Ross teaches at Indiana University.