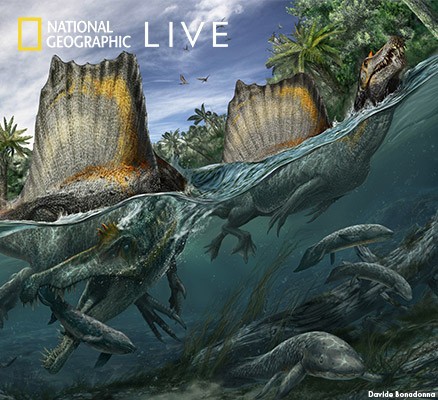 Price includes fees. Purchasers will receive a ticket confirmation email with a web link to view the presentation. Portland'5 Box Office customer service is available via email and by phone: 503-248-4910.

Groundbreaking new science is changing what we thought we knew about how dinosaurs looked, moved, and lived. Newfound troves from the Moroccan desert suggest that the immense predator Spinosaurus used crocodile-like jaws and a unique, paddle-like tail to actively pursue prey in the water: a first for dinosaurs. And in Chile, scientists have discovered a shocking new therapod. Unlike its cousins, Velociraptor and T. rex, Chilesaurus consumed a vegetarian diet. Join leading paleontologists Nizar Ibrahim and Sebastián Rozadilla for stories and conversation about the evolving science of dinosaurs.

This 60-minute virtual event will include stories and visuals; live, moderated conversation; and audience Q&A.

This presentation is part of the Portland'5 National Geographic Live Virtual Series.

Born in La Plata, Argentina, from an early age Sebastián Rozadilla had a fascination with nature. He began his studies at the National University of La Plata and worked at the Bernardino Rivadavia Argentine Museum of Natural Sciences studying herbivorous dinosaurs. He is currently pursuing his doctoral thesis on bird evolution. Sebastián’s main interests are investigating the evolution of the least studied groups of dinosaurs, as well as exploring and traveling the continent in search of new fossil remains. He also enjoys drawing these lost worlds and bringing these extinct creatures to life through his drawings.