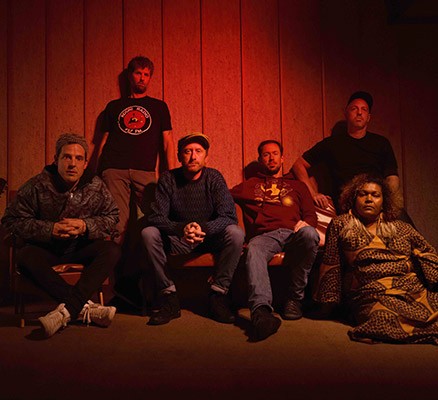 Emma Donovan and The Putbacks | Out the Door

Acclaimed Indigenous vocalist Emma Donovan and Melbourne rhythm combo The Putbacks burst on to the Australian scene with their album Dawn in 2014, announcing a new voice in Australian soul music. Emma’s songwriting is optimistic, impassioned, and bruisingly honest, The Putbacks’ music is fluid, live and raw, and the collaboration has won friends and admirers all over the world.

The project was born of Emma and the band’s shared love for classic US soul and the protest music of Indigenous Australia. Shades of every soul record you ever liked sneak through: Al Green’s Hi Records era? Check. Aretha’s Classic Atlantic recordings? Check. Stacks of Stax? Check. It’s all there, but there’s also a whole lot of Coloured Stone and Warumpi Band influences giving this project a uniquely Australian slant.

Emma grew up singing church songs with her grandparents on the North coast of New South Wales and her first secular gigs were singing in the family band, The Donovans, with her mother and five uncles. Throughout her career, she has toured and recorded with many of the mainstays of Australian music industry including Archie Roach, The Teskey Brothers and Paul Kelly and was a part of the Black Arm Band project. It was in The Black Arm Band that Emma met members of The Putbacks and their journey together began.

The Putbacks are stone cold pros, grizzled veterans of all the tours and all the studios. As individuals, they’re the players behind so many bands it’s difficult to list, but let’s start with Hiatus Kaiyote, The Bombay Royale, D.D Dumbo, Swooping Duck and The Meltdown. When they come together, they’re one of the tightest, sharpest, most dynamic musical units ever to exist. Their collaboration with Emma elevates their music and Emma’s songs to another level.

An Evening with The Petersens

American roots music band The Petersens present An Evening with the Petersens at the Winningstad Theatre...

Portland'5 presents funk and soul group Emma Donovan & The Putbacks live in concert at the Newmark...

All ages welcome. Reserved seating. Everyone must have a ticket. No refunds, no exchanges.