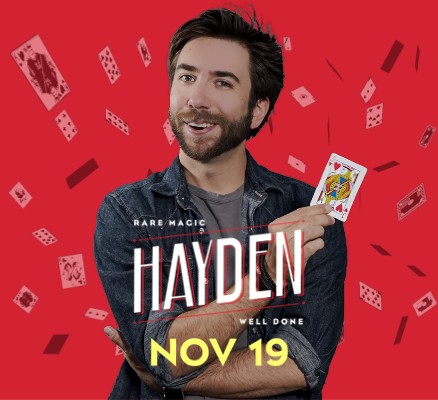 Hayden is a modern magician and mentalist based out of New York City. His magic combines sleight of hand, psychology, and comedy into a fun, interactive show that keeps you guessing.

Hayden was featured on the latest season of Penn & Teller: Fool Us, and completed a TED talk on interactive performance. Hayden also performs for companies such as Google, IBM, and Viacom.

Some of the magic you can expect to see in Hayden’s magic show includes magic with borrowed smartphones, psychology tricks, stunning sleight of hand, and Close-Up magic projected on stage.

“Hayden provides a fun, entertaining show that holds your attention throughout the entire evening. The variety of his performance and the skill to which it was executed was captivating and attested to his prowess as a magician and performer.” – World Magic Review UK

Is this show appropriate for kids?

There is no overtly offensive or vulgar material in the show, but because of the complexity of some of the magic, Hayden’s show is recommended for ages 13 and older.

Can we meet Hayden after the show?

Hayden will do a brief meet and greet after the show.

What if someone in our group isn’t really into magic? Will they still enjoy it?

Hayden will ask for volunteers for each trick but you are by no means obligated to come on stage. Audience participation is highly encouraged, though!

An Evening with The Petersens

American roots music band The Petersens present An Evening with the Petersens at the Winningstad Theatre...

Portland'5 presents funk and soul group Emma Donovan & The Putbacks live in concert at the Newmark...

Recommended for ages 13 & older. Reserved seating. Everyone must have a ticket. No refunds, no exchanges. 8 ticket limit per household.