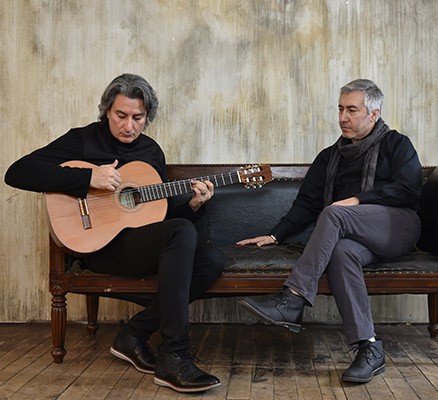 BaSiaNova is a musical collaboration between Babak Amini and Siamak Shirazi which started in the winter of 2017. Their unique perspectives about music and life is expressed in their upcoming album, coming out this fall, and live performances. They are combining more than 30 years of Babak’s experience as an award-winning performer, composer, arranger, and producer, and Siamak’s experience as a wellness guru and a vocalist. Their sound represents a fusion of jazz, flamenco, and contemporary Persian music and creates a rare, avant garde style of live performance.

Siamak has a natural talent for music which started manifesting as early as when he was two years old. He grew up in a family who loved and enjoyed music. He started reciting poetry and singing when he was six years old. Music has remained to be an anchor for his soul through the rough seas of his life, and he always found a way to return to this natural outlet for expression of his innermost feelings.

Siamak used to be a professional singer in mid-1980s but set that aside to attend college and later, build a career in wellness-based medicine. However, in addition to growing his wellness enterprise, Siamak has always remained a music lover and a musician at heart. And now, after taking a 25-year hiatus, he is returning to music.He is privileged to collaborate with one of the best in the business, Mr. Babak Amini on his comeback project. Babak has been an essential part of Siamak’s vision for his return to singing, and his beautiful soul is ever-present as the energy which is traveling through Siamak’s voice.

Babak is a highly talented and accomplished Iranian Canadian musician and composer, guitarist, and a member of the American Guitar Society (CSUN University, Northridge, CA). He is also a member of Toronto Musicians’ Association, (TMA) and an instructor at the Canada Music Academy.

He entered the professional world at the age of 18. His first album was introduced in 1990 and was called ‘Gray Rain’ followed by ‘Blue of the Rain’. He then released his third album, ‘Shadow of My Own’, which had vocals that was based on Persian poets such as Hafez, Rumi, Babataher and Nima.

Babak’s curier comprises a vast array of accomplishments, amongst which are the music director and the band leader for many prominent international singers and musicians, including: Googoosh, Ebi, Faramarz Aslani, and more.