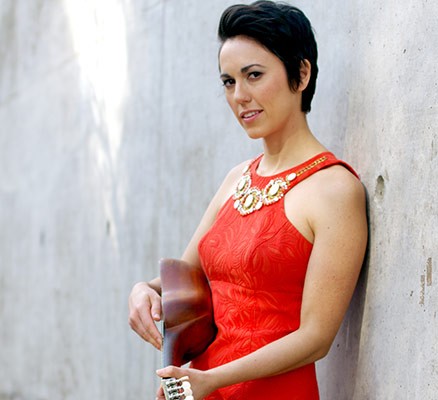 Due to expected rain today, this event will take place in the Antoinette Hatfield Hall Rotunda.

Gina Chavez is blending the sounds of the Americas with tension and grace. A 10-time Austin Music Award winner and 2015 Austin Musician of the Year, she and her band can now be seen on PBS in “Gina Chavez: Live from the Kate.” She has completed a 12-country tour as cultural ambassadors with the U.S. State Department, uniting audiences from Texas to Uzbekistan and Venezuela to Saudi Arabia. Her bilingual album, Up.Rooted, topped the Amazon and Latin iTunes charts following a feature on NPR’s All Things Considered and her Tiny Desk concert has more than 750,000 views.

Gina’s Spanish-language anthem, “Siete-D,” won the grand prize in the John Lennon International Songwriting Contest and recounts her experience volunteering in a gang-dominated suburb of San Salvador where she and her wife co-founded Niñas Arriba, a college fund for young Latinas.

Chavez is currently touring her new EP Lightbeam, a collection of five songs about the journey and hardships she and her wife have undergone to be able to publicly express their love for each other as Catholic Latinx women. “Steeped in slow-burn soul and uptempo R&B,” Lightbeam already has NPR under the spell of a new sound that expands upon her passionate collection of bilingual songs that traverse cumbia, indie-folk, blues and Latin pop.

“Chavez’s voice is perfectly suited to reflect all of those experiences and to take us to places where we dare to let our emotional guards down.” (NPR/Felix Contreras)

“‘Lightbeam‘ was born from a life with the woman I love,” Chavez said. “But really, it’s a love letter to all those who fall into that beautiful gray area between black and white. To those who feel the need to slink into the shadows and hide who they are. ‘Lightbeam‘ is about living our true selves right now. Because we are all beautiful just the way we are.”

“Most striking is Chavez’s ease as she moves between social and love songs, between North American and Latin genres, and even between languages: When she passes mid-song from English to Spanish and back, it’s the most natural thing in the world.“ –The Boston Globe

Gina and her band have opened for Grace Potter, Grammy winners La Santa Cecilia, Gaby Moreno, and Grupo Fantasma, and are winning audiences throughout the U.S. and abroad while on tour as official ambassadors with the U.S. State Department's American Music Abroad program.