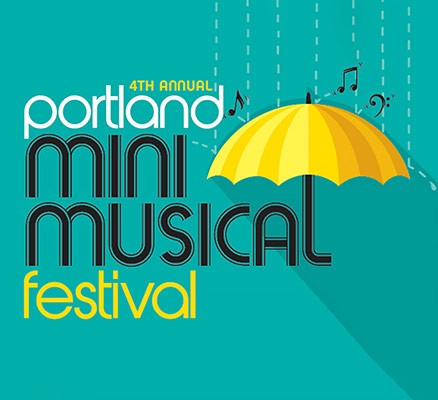 We’re back with your chance to see six ALL NEW musicals all in one night!

Join Live On Stage for Portland's own festival of all new musicals and check out six brand new 15-minute shows by local writers and composers. The festival has been a huge hit for the past three years and performances have been completely sold out. Brett Campbell from Oregon ArtsWatch wrote Portland’s Mini Musical Festival is “a thoroughly entertaining evening of music and theater.”

Tickets available for pick up at Will Call one hour prior to curtain.

Doors to the theater open 30 minutes prior to curtain.

Murder From Beyond
Music, Book, and Lyrics by John Vergin
Directed by: John Oules
Lady Clarissa, who is an adept in spiritualism, communicates with Hendricks who, having died, now lives in the spirit world. He informs her that his death was not accidental, but was actually murder. Lady Clarissa summons Inspector Spot to help determine who the killer was.
Starring Jennifer Goldsmith, Hudson Hale, Kevin Michael Moore, Cassandra Pangelinan, and Norman Wilson

The Saga of Dusty’s Blues
Book, Music, and Lyrics by Rick Lewis
Directed by: Kevin Paul Clark
Dusty is the happiest girl in the whole USA.  She knows that the only thing holding her back is that she has no pain.

Book Club
Book, Music, and Lyrics by Chari Smith
A group of women in varying stages of their adult lives, come together under the pretense of discussing a book. The book never gets discussed, but wine is imbibed, secrets are shared and support is given. It is a heartfelt tribute to the power of friendship among women, no matter what their age.

ARM
Music, Book, & Lyrics by Matthew B. Zrebski
Directed by: TBA
We must all be protected...from ourselves – from our actions – and especially…from touch!  But don’t worry, there’s a drug for that!  Everything has a treatment!  And new girl, Belinda, will be properly educated by the school administration along with top student, Michelle, who will stop at nothing to shield her beloved Chris from Belinda’s wandering hand…which is, of course…attached to her arm…
Starring Jennifer Goldsmith, Hudson Hale, and Norman Wilson

The Safe
Music by Karl Mansfield
Book & Lyrics by Shawn Rogers
Directed by Kevin Paul Clark
Four Mafia Thugs watch as a young man sitting in front of a large safe works the dial in an attempt to open it. What riches await them within?  How will they spent it? And who made the first gluten free pizza and why? Oh..and they sing.
Starring Camille Trinka and TBA

SAMx
Book by Marianna Thielen
Music and Lyrics by Reece Marshburn and Marianna Thielen
Directed by: Marianna Thielen
A town holds its first ever SAMx Speeches and brings in three local influencers to give inspirational talks and share their stories.
Starring Camille Trinka, Kevin Michael Moore and TBA

Doors Open: 30 minutes prior to start

General admission seating. Everyone age 1 & over must have a ticket. No refunds, no exchanges.