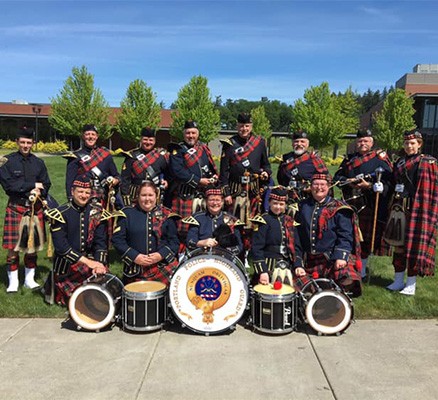 The Pipe and Drums of the Portland Police Highland Guard Noontime Showcase performance on Wednesday, June 3, 2020 is cancelled.

A Portland based bagpipe band, the Portland Police Highland Guard exists to provide honors for emergency service personnel and others, and their families throughout the Pacific Northwest.

Consisting of serving and retired law enforcement personnel, as well as civilian volunteers from all walks of life, the Highland guard has had the honor of performing at memorials, Academy graduations and retirement celebrations for the Portland Police Bureau for the last 20 years.

The Portland Police Highland Guard is dedicated to the honor and commemoration of fallen police officers through the playing of traditional bagpipe band music.

Appropriate for all ages.

Portland’5 Centers for the Arts presents Noontime Showcase, bite sized entertainment for you to squeeze into your lunch hour! These FREE monthly performances will feature some of Portland’s most popular acts. Noontime Showcase is presented by the volunteers of Portland’5 Centers for the Arts, whose goal is to make the performing arts accessible to everyone in Portland. Each season over 1,000 people attended the FREE monthly performances.

This Noontime Showcase will take place outside on Main Street (at Broadway Ave.), next to Arlene Schnitzer Concert Hall and Antoinette Hatfield Hall (1111 SW Broadway Ave.).