For the Love of Dogs, Cats and Bicycles: The Pedals and Paws Art Show 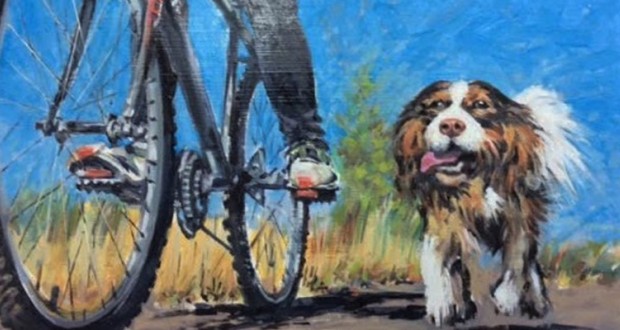 In 2017, the celebration began with the show, "Dog Park." In 2018, after being contacted by several cats with press agents, we created the show, "It's Raining Cats and Dogs." This year we present the "Pedals and Paws" show, the third in a series of art shows celebrating those four-pawed spirits that curl up in our homes and our hearts. And to honor Portland's love affair with two-wheeled transportation, this year we've added the realm of bicycles.

Can a cat nap, a bike stand, a dog snooze? Are they better portrayed by themselves or journeying through our hearts together? Which chases, who follows? Come see what nearly three dozen Portland artists have imagined.

The Pedals and Paws show is available for public viewing in the rotunda of Antoinette Hatfield Hall (located at 1111 SW Broadway Ave., Portland, OR 97205), beginning with an opening reception on Saturday, April 6, 2019 from 5pm to 8pm. The show will be open to the public Monday-Saturday 10am-5pm, in addition to event nights/matinees through April 2019.

Free and open to the public.