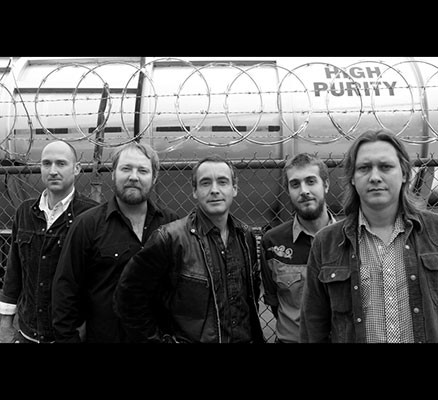 Concert will be held in the lobby of Hatfield Hall (next to Main St.) due to the heat. All ages welcome. Seating is available on a first come, first-served basis. Tables are reserved for food and beverage patrons.

We’re excited for this week’s Music on Main featuring Portland’s best bluegrass band Jackstraw! Due to the heat, the show will be held in the lobby of Antoinette Hatfield Hall located right next to Main Street. Join us for great music, delicious food, and glorious air conditioning!

Portland bluegrass band Jackstraw has been the flagship of the American roots movement since they formed in 1997. They know their bluegrass history and don't hesitate to pay homage to their heroes, like the Stanley Brothers, but this ain't your standard bluegrass band. These boys have a cutting edge take on bluegrass picking that they've developed over years of touring the United States and their original songs can sound as much country as old-time. This is bluegrass that belongs in a dusty honky-tonk, country twang as rooted in Bill Monroe as George Jones, an old-timey sound for a new age.

About Music on Main

On Wednesday evenings in July and August, Portland’5 takes advantage of the summer weather in Portland to present the Music on Main concert series. The free outdoor concerts are held on Main Street next to Arlene Schnitzer Concert Hall—between Southwest Broadway and Park Avenue in downtown Portland—and feature popular local musicians playing a diverse collection of music.

Music on Main is open to the public and the concerts run from 5pm to 7pm. All ages are welcome. Seating is available on a first come, first-served basis—tickets are not required.

Food and drinks (including alcohol for those 21+ w/ ID) are available on site. Tables are reserved for food and beverage patrons. Table service begins at 4pm.

Thanks to Our Sponsors!

Jim Brickman presents his "A Very Merry Christmas" concert with Mat and Savanna Shaw at the Portland'5...