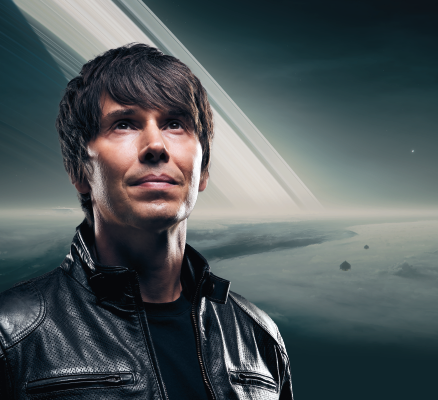 “Horizons” takes us on a dazzling cinematic journey. A story of how we came to be and what we can become.

The deepest of questions will be explored using the latest advances in our understanding of quantum theory, black holes, biology, planetary science, astronomy and cosmology. Using state-of-the-art LED screen technology, venues will be filled with images of far-away galaxies, alien worlds, supermassive black holes and a time before the Big Bang.

What is the nature of space and time? Why does the Universe exist? How did life begin, how rare might it be and what is the significance of life in the Cosmos? What does it mean to live a small, finite life in a vast, eternal Universe?

“Horizons” is a celebration of our civilization, of our music, art, philosophy and science; an optimistic vision of our future if we continue to explore Nature with humility and to value ourselves and our fellow human beings. Brian will again be joined by co-host of The Infinite Monkey Cage and award-winning comedian Robin Ince, perhaps the only collection of sentient atoms in the observable Universe capable of overseeing a Q&A with an audience of 10,000 people while wearing an old cardigan.

As a broadcaster, he has presented a number of highly acclaimed science programs for the BBC including Wonders of the Solar System, Forces of Nature, Stargazing Live and, in 2019, The Planets. He is credited with boosting the popularity of subjects such as astronomy and physics and has garnered a host of accolades for his TV work, including two Royal Television Society awards and a Peabody Award for Wonders of the Solar System.

Monqui welcomes pop rock band Bastille to the Portland'5 Keller Auditorium on Monday, May 23, 2022 at 8pm...

Broadway in Portland presents Pretty Woman: The Musical at the Portland'5 Keller Auditorium May...